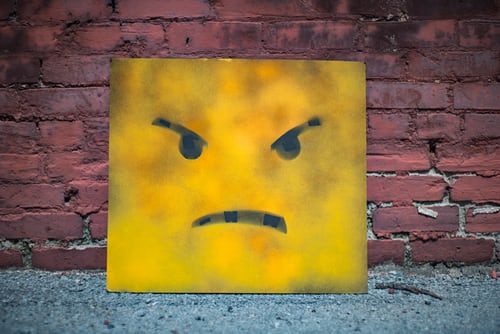 We all have a dark side that is as much a part of who we are as our sunny-side-of-the-street disposition. And denying even the occasional rendezvous with negative emotions like anger can make us as suspect as the expressed emotions themselves. But there is a dark side that is unequivocally dangerous to the health of relationships and the individuals in them. So, if you find yourself feeling contempt toward your spouse, the time to shed some light into the darkness is now.

Logic and wedding day bliss would tell you that feeling contempt toward your spouse isn’t natural. Surely you would have scoffed at the mere idea of it back when you were happily planning your future together.

But contempt is an insidious beast. It rears its ugly head from a cauldron of long-simmering negative thoughts. And it doesn’t attack the habits or misdeeds of its target. It goes straight for the heart, ripping at the person’s sense of self with weapons like sarcasm, mocking, and hostile humor.

Gottman’s Four Horses of the Apocalypse are frequently referenced for their ability to predict the demise (or potential redemption) of a marriage. Contempt and criticism in marriage relationships are the two offending behaviors, and stonewalling and defensiveness are their countering, protective behaviors.

By the time you get to the point of feeling contempt for your spouse, your marriage has already taken a turn for the worse.

This disposition, which is a combination of disrespect and disgust, is the worst of the Four Horsemen and the greatest predictor of divorce.

Imagine looking at the person you married and feeling such disdain that you want nothing to do with him/her. Imagine seeing this person as so far beneath you that he/she is inferior, unworthy, and a trigger for your disgust.

That is how vile and dangerous contempt is. Its very nature of moral superiority shreds the marriage’s intimacy and the equality on which it depends. It may be triggered by a behavior or a series of behaviors. But the emotion targets the person and creates a no-win situation.

The proverbial saying “familiarity breeds contempt” adds a bit of eloquence to the harshness of feeling contempt toward your spouse. But the meaning is the same.

Contempt, though, isn’t just about differences in style and preference. It’s about a belief that another person has a moral or character flaw that makes that person unworthy…and inferior to you.

In this regard, contempt reeks of judgment and self-assigned moral superiority.

It’s tragic, really, that contempt ever has the opportunity to grow in a marriage. After all, it’s not a spontaneous reaction to an uncomfortable conversation or situation.

It arises, instead, from a stewing, smoldering accumulation of resentments over time. Too many disappointments. Too much neglect. Too many broken promises.

They all start to fume under the surface, like molten lava churning in a volcano, ready to pour over everything in its path when the volcano explodes.

If you are the contemptuous person in your marriage, your hostility is outwardly directed toward your spouse.

But your projection is, at least in part, actually a masking of what you despise in yourself. You are not throwing darts at specific behaviors or failings, but at scathing character judgments you have made. “You’re lazy/weak/crazy/stupid/irresponsible!”

Instead of focusing on how to communicate with your spouse better, especially when you’re angry, you go for a character assassination.

You become a psychiatrist — miraculously without the qualifications — able and quick to diagnose your spouse’s mental ineptitude. “He’s a damn narcissist!” “She’s neurotic/bipolar/psychotic!” You may even take to the internet to do your investigating and to justify your diagnosis.

But, like a karmic boomerang, contempt doesn’t inspire a change in the behavior that triggered it in the first place. Instead, it tends to serve as a Petri dish for more of the same.

Through projective identification, people almost instinctively live up (or down) to how they are perceived. Tell a teenager enough times that he is lazy and stupid, and you’re likely to create a self-fulfilling prophecy. Accuse your spouse of having ulterior motives around everyone of the opposite sex, and you may one day have the opportunity to say, “I told you so.”

The tragedy of feeling contempt toward your spouse is that it is so unnecessary…and preventable.

Some people have a contemptuous personality and are inclined to project their self-proclaimed superiority onto everyone in their lives.

But when your love turns to contempt, chances are you have cumulatively sequestered your negative thoughts. Instead of communicating your feelings and needs in an open, responsible way, you “stuff the sting” of your emotional blows.

Perhaps you have tried to communicate in the past but have been greeted with indifference, lack of compassion, or lack of change. And the repetitive defeat just wasn’t worth the effort anymore.

Your contemptuous retaliation may appear to give you recourse. But you are actually destroying your own health and happiness as much as you are that of your spouse and marriage. Literally.

Remember that “projective identification”? It works in the positive, too. You have the choice to help manifest the behaviors and attributes you seek…by changing how you see.

If you are seeking to destroy your marriage, then feeling contempt toward your spouse will guarantee your success.

But if you want the happiness you once knew but just feel so hurt that you don’t know how to get there, shift your perspective. Your thoughts — both positive and negative — are the seeds of your destiny.

Marriage, like the people who comprise it, tends to live up to the qualities and merits assigned to it. How you choose to see changes what you see.

Why not give your spouse — and ultimately yourself and your marriage — the benefit of the doubt?

Mary Ellen is a highly skilled and intuitive relationship guide. She brings over 35 years’ experience with individuals and businesses as a lawyer, mediator, personal coach and educator. She received her J.D. at University of New Hampshire Law School and a Master’s Degree at Harvard University. Mary Ellen co-authored Relationship Transformation: How to Have Your Cake and Eat It Too with Jerry Duberstein — and they were married by chapter 3. Mary Ellen brings a unique blend of problem-solving, practicality, and warmth to her work. She’s a highly analytic person, with geeky and monkish tendencies. She’s a daredevil skydiver, a voracious seeker of knowledge, and an indulgent grandmother. Her revolution: helping people become the unapologetic rulers of their inner + outer realms. Read more about the retreats
View all posts by Mary Ellen Goggin →
How To Respond To Contempt In Marriage
How To Save Your Marriage When You Feel Hopeless And All Alone