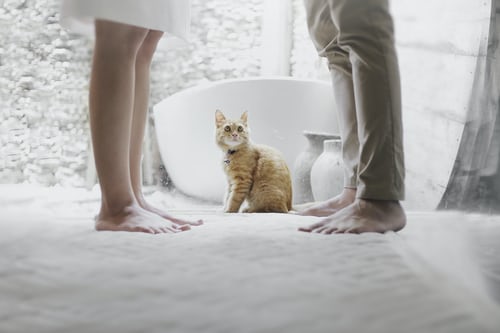 June 10, 2020 / Mary Ellen Goggin / Comments Off on 7 Essential Tips On Talking About Infidelity With Your Spouse After Someone Cheated

The irony of surviving infidelity is that you have to do now what you should have done then.

Communication now has make-or-break importance. Talking about infidelity with your spouse after cheating has occurred is a non-negotiable if you want to save your marriage.

And it ain’t fun.

As damning as infidelity is to a marriage, more couples survive it than don’t.

Relationship therapists find that men are less likely to have an emotional attachment to their affair partners, so their marriages are more likely to survive than if women cheated.

And therein lies the rub: emotions.

Talking about infidelity with your spouse after cheating is, in large part, a navigation of emotions. And that goes for both the cheater and the betrayed.

Anyone who has driven a boat knows that one of the most important lessons to be mastered early is how to safely cross a wake. Improper wake crossing, especially at high speeds, is the second greatest cause of injury to boaters.

Safely crossing over a wake caused by another boat involves strategy, skill, and prudence. Barrelling headlong into a high swell will be like hitting a cement wall.

But, cutting through at an angle and at a slowed speed will allow a smooth transition and the ability to resume speed and position.

And so it is with communication and never more so than when you are talking about infidelity with your spouse after cheating has occurred.

The wake of emotions caused by infidelity is understandably high. You don’t have the luxury of assuming you have a smooth lake all to yourself for mindless driving.

Every move you make — your speed, direction, steering — matters. How you combine those skills will ultimately determine your ability to ride up along the offense itself…and, eventually, pass it by.

Talking about infidelity with your spouse after cheating has occurred involves more than just the “what.” It wraps the “what” in trappings of “how,” “when,” “where,” and “why.”

If you’re thinking to yourself, “That sounds like any kind of healthy communication,” you’re on the right track.

But now consider that, according to a survey of 5,000 people in the UK, the most common reason shared by both genders for infidelity was poor communication.

And now that the offense has happened, you’re expected to communicate…in spades. It hardly seems possible, let alone fair. But it can be done in such a way that future communication is better than communication before the affair.

Here are 7 tips on talking about infidelity with your spouse after cheating.

This is especially important for the cheating spouse who has to accept responsibility for choosing to have an affair.

If you are the one who strayed, you will be barraged with questions from your spouse. But you won’t be able to answer them until you first answer the questions within yourself.

Why did the affair happen? What were you seeking that wasn’t being fulfilled in your marriage? Were you motivated by revenge toward your spouse?

How and why did you fail to communicate your needs in your marriage? What did you love about the affair?

Did or do you still have an emotional connection to your affair partner?

Likewise, if you are the betrayed spouse, you will have to examine your own role in your marriage. You will never have accountability for your spouse’s willingness to have an affair.

But just like your spouse, you will have responsibility for the quality of your marriage prior to the affair and going forward.

When you’re flooded with negative emotions like anger and guilt, you’re not likely to want to own them. It’s far easier to cast them off to the other person.

But finding ways to focus on the other person’s flaws is just a form of distraction. Taking the focus off yourself creates a communication game of hot potato.

And before you know it, all the attention is on a scorching spud flying through the air and how to avoid it.

Own up. Hold the heat, so to speak. Use “I” statements so your spouse is willing and able to listen without becoming defensive.

Taking responsibility for your own feelings and needs demonstrates humility and self-accountability. And it inspires your listener to do the same.

If you are the cheating spouse, you are going to have to come clean. And yes, the transparency is probably going to make your skin crawl.

Everything that felt so passionate and beautiful during the affair will feel dark and shameful in its telling. Your spouse will want to know…and will dread knowing.

But the worst thing you can do is set your spouse up for a lifetime of “What am I going to find out today?” In the long run, it’s better to be transparent and completely upfront with what your spouse wants to know.

This goes for both partners, not just the one who cheated. It’s easy to be empathetic toward the betrayed spouse.

But the spouse who cheated is usually filled with shame, guilt, regret, and his or her own form of sadness. Even in the act of being transparent, it’s important to be aware of your spouse’s feelings and the ways they get expressed.

“Brutal” has no place in front of “honesty.” Talking about infidelity with your spouse after cheating is tough enough without adding insensitivity.

Staying in the “I” is the best way to curb the temptation to blame your spouse for what you don’t want to own.

Consciously keep your hands in your lap when the urge to blame creeps up. Not being able to point your finger has a way of keeping your words in check, too.

If you are the cheating spouse, avoid rationalizing your actions by blaming your spouse.

And if you are the betrayed spouse, remember that, if you want your questions answered, you have to give your spouse room to answer them.

Talking about infidelity with your spouse after cheating has occurred isn’t a one-time thing.

It will go on for a long time. And the same topics and questions will inevitably come up over…and over…and over again.

It’s important to place limits on the amount of time spent discussing the affair. If you don’t intentionally talk about non-emotional and enjoyable topics, you will allow the affair to define your marriage.

Remember to infuse your relationship recovery with hints of what you’re fighting for.

At some point, it will be necessary to acknowledge that you have safely crossed the wake. Allow your marriage to gently pick up speed until you have left the affair behind.

Knowing how to talk with your spouse after an affair is never on a couple’s premarital reading list. It often takes the guidance and collaboration of therapists who specialize in marriage and infidelity issues.

The fact that you believe your marriage is worth fighting for, despite the hurt and regret, is your beacon of hope.

Every choice offers a wealth of lessons. You get to choose what you learn…and how you change.

This article was originally published on YourTango.