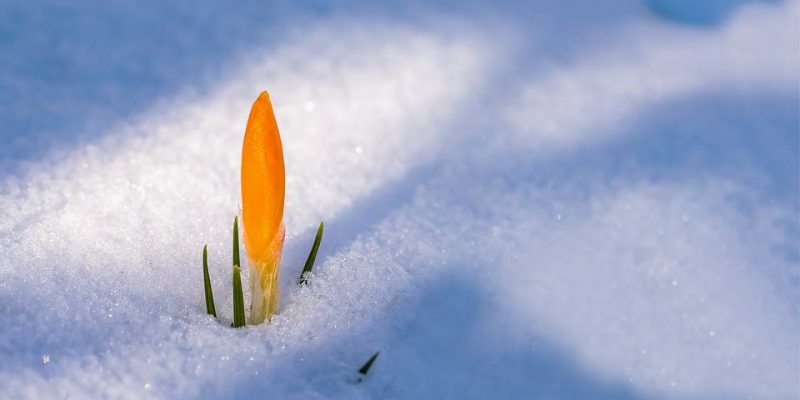 By Mary Ellen Goggin on March 19, 2018 in Relationships

One of my favorite things about March is the impulse it brings to deep clean and put the house in order. I feel energy akin to a crocus pushing up through the ground.  “It is time; I am irrepressible,” it sings.

Spring gifts us with a booster-shot of motivation. Who can resist the urge to clean, de-clutter, purge, and simplify our environment? What better way to enjoy shining it up than with a vase of a couple dozen daffodils, a pot of lavender lilies, or white orchid already in bloom. After all, spring is a time for renewal; it is the cosmos’ giant reset button, heralding the optimism and promise of tender new life.

This year your spring impulse might lead you beyond the physical space of home. What good are shiny new environs when the relationship of its inhabitants also needs a deep cleaning and de-cluttering? I don’t know of one relationship that wouldn’t benefit. You can peel back the rug and deal with what’s been swept under it: disappointment, anger, hurt, resentment, and negative experiences. You can talk about what happened, process it together, and apologize. You can look at old beliefs, habits, and patterns and toss out what is no longer needed. You can decide to let go and start with a clean slate, make room for the positive.

If you’re feeling, like most people, that your relationship needs a bit of spring clean, you can use the handy checklist we made to guide you. The process involves removing emotional clutter, ushering metaphorical dust bunnies from under the bed, and opening the windows wide to let in the fresh air.

Now take your list and organize the items from the easiest to most difficult to resolve. As an example, our clients Nick and Nora created the lists below:

Ok, then, now that you have some dirt, um, data, it is time for the deep clean. Talk to each other about the items on your list and the negative feelings involved. Decide if you can tackle the first couple of items, the easier ones, and then agree to those changes. It may seem counter-intuitive, but often, once you take care of the easier stuff, the harder stuff takes care of itself. Success breeds success.

How did it go for Nick and Nora?

Nora discovered that by paying more attention to Nick and less to Facebook, and going to bed at the same time as he does three times a week, Nick felt cared for and valued. In his eyes, he had moved up to the top of the totem pole and felt more significant to Nora. In turn, he felt generally less irritated and resentful, and more able to be patient with her chronic lateness. Feeling loved by Nora gave Nick the motivation to re-direct his attention to Nora on date night.

Nick made extra coffee for Nora who was surprised to learn he didn’t do so before because he assumed she would want fresh coffee when she got up an hour later than Nick. He agreed to text Nora once a day during work as long as Nora did not raise problems best handled face-to-face. Nick did not start to help the kids with their homework each night. After some thought, he realized why and explained it to Nora.. Nick believed in raising independent kids and felt their kids were good students and could handle homework on their own. He offered to help if they were really struggling with a subject and actually needed help. Helicopter parent was outside his job description.

Ready to spring forward to a shinier relationship? Get started with the checklist and you will be surprised with the result. Happy spring cleaning together.

Mary Ellen is a highly skilled and intuitive relationship guide. She brings over 35 years’ experience with individuals and businesses as a lawyer, mediator, personal coach and educator. She received her J.D. at University of New Hampshire Law School and a Master’s Degree at Harvard University. Mary Ellen co-authored Relationship Transformation: How to Have Your Cake and Eat It Too with Jerry Duberstein — and they were married by chapter 3. Mary Ellen brings a unique blend of problem-solving, practicality, and warmth to her work. She’s a highly analytic person, with geeky and monkish tendencies. She’s a daredevil skydiver, a voracious seeker of knowledge, and an indulgent grandmother. Her revolution: helping people become the unapologetic rulers of their inner + outer realms. Read more about the retreats
View all posts by Mary Ellen Goggin →
5 Myths about Jealousy
What Is Your Communication Style: Direct or Indirect?