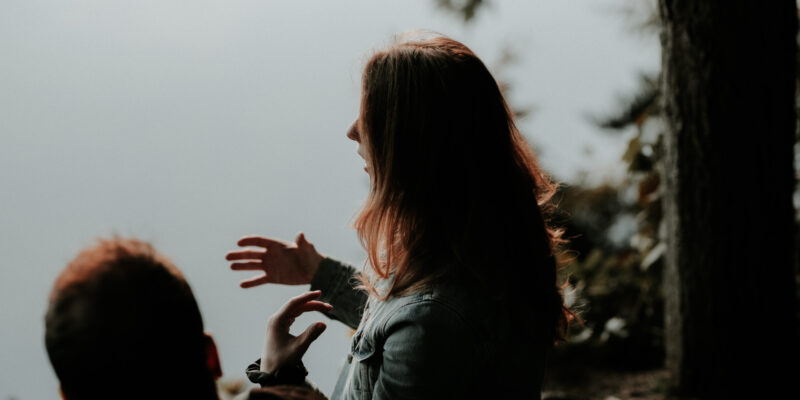 By Mary Ellen Goggin on November 22, 2021 in Marriage Counseling

You’ve got a choice to make. It doesn’t even matter who did what. You’re standing at a three-tined fork in the road, and there’s no turning back. One of you betrayed the other and your marriage, and the only secrets left undisclosed are the details. “Surviving marital infidelity” is now the tagline for your day-in-the-life-of documentary.

You can succumb to the weight of betrayal, pain, embarrassment, anger, and shame, calling it quits in an effort to wipe the slate clean. Cut your losses, suffer the blow, fabricate the story you’ll tell going forward, and end things now.

You can stay in your marriage and try to move on as if nothing has happened. Maybe even buy a bigger house so you can tiptoe around the elephant in the room for the rest of your lives.

(Good luck with that.)

Finally, you can stay in your marriage and do something about it. You can step off the pillory, cut off the scarlet letter of Puritan damnation, and commit to the painful but redemptive work of repairing your marriage.

There is also the possibility that you and your spouse will want to travel different tines. And then what?

You may not even know how to make a choice right now. And you may not even recognize when you are making a choice. Surviving marital infidelity is just that difficult, whether you survive with your marriage or without it.

If you and your spouse want to come through this together, despite the invisible horizon in your landscape, you’re going to need help.

Why do some couples make it and others don’t? What do the successful couples know or do differently that the now-divorced couples don’t?

Whether or not a marriage survives an affair is influenced by a cluster of tangled factors. The type (sexual, emotional) and length of the affair, whether it was discovered or disclosed, the identity of the affair partner…. They all affect the temperament of the recovery and your decision-making processes.

Ultimately, it’s the vowed determination of the spouses to see their marriage through the “worse” in hopes of reaching the “better” that saves them.

Some couples may wonder if surviving marital infidelity is possible without counseling. While there may be legitimate reasons (e.g., financial) that a couple can’t go to couple’s therapy, counseling greatly increases the chance of success.

Let’s look at 6 of the most impactful reasons that surviving marital infidelity requires therapy.

There is no guarantee, obviously, that your marriage will survive the affair that broke it.

However, if you can see through the darkness of all the hurt to even a glimmer of light and possibility, you have hope. And hope is a worthy foundation on which to build.

Surviving marital infidelity is the test of a lifetime. But it can lead you to a depth of intimacy you once took for granted or didn’t even know existed.

When answering Miranda and Steve’s fears about not being able to trust again, their therapist says, “All you can know for sure is that you want to move forward and that the love you have for one another won’t let that happen. And that’s what we’ll discover here.”

Mary Ellen is a highly skilled and intuitive relationship guide. She brings over 35 years’ experience with individuals and businesses as a lawyer, mediator, personal coach and educator. She received her J.D. at University of New Hampshire Law School and a Master’s Degree at Harvard University. Mary Ellen co-authored Relationship Transformation: How to Have Your Cake and Eat It Too with Jerry Duberstein — and they were married by chapter 3. Mary Ellen brings a unique blend of problem-solving, practicality, and warmth to her work. She’s a highly analytic person, with geeky and monkish tendencies. She’s a daredevil skydiver, a voracious seeker of knowledge, and an indulgent grandmother. Her revolution: helping people become the unapologetic rulers of their inner + outer realms. Read more about the retreats
View all posts by Mary Ellen Goggin →
How To Gain Self-Respect In A Relationship

Sign up for our mailing list and you'll get incredibly helpful insights, our latest articles and fun videos. You'll also be the first to hear about new ways to connect with us (like our upcoming free monthly calls!). Don't miss a thing. Sign up now.

Thanks anyway, I'll just muddle along.